This Past Christmas Eve: a Statue of a Ram was Discovered Near an Ancient Church in Caesarea

In Christianity the portrayal of rams was used to represent the faithful, or even Jesus himself

An impressive marble statue of a ram was exposed near an ancient church that dates to the Byzantine period. The discovery was made last Thursday morning in an archaeological excavation the Israel Antiquities Authority is conducting in the Caesarea Harbor National Park, at the initiative of the Caesarea Development Corporation.

In Christian art the ram is often depicted carried on the shoulders of the “Good Shepherd” (that is, Jesus, who is portrayed as the shepherd tending his flock), and sometimes the ram is situated to the left or right of Jesus. In Christianity the ram, like the lamb, represents the faithful, or Jesus himself, whose anguish and death were meant according to Christian belief to atone for original sin (the origin of the image is in John 29:1).

The ram appeared alongside the Greek gods Hermes and Mercury in Roman art, and it was a representation of the god Amun in Egyptian mythology.

According to Dr. Peter Gendelman and Mohammad Hater, directors of the excavation on behalf of the Israel Antiquities Authority, “Caesarea never ceases to surprise as evidenced by this amazing statue that was discovered today. In ancient Christianity Jesus was not portrayed as a person. Instead, symbols were used, one of which was the ram. It may or may not be a coincidence, but the statue was uncovered on Christmas Eve. The statue that we found might have been part of the decoration of a Byzantine church from the sixth–seventh centuries CE at Caesarea. By the same token it could also be earlier, from the Roman period, and was incorporated in secondary use in the church structure”. 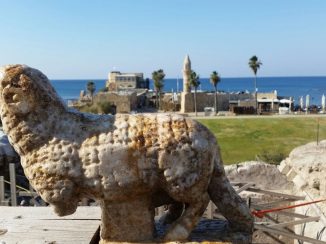 Marble statue of a ram next to a Byzantine church in Caesarea. Photograph: Vered Sarig, The Caesarea Development Corporation. 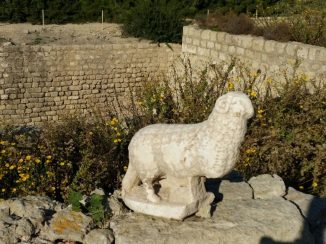